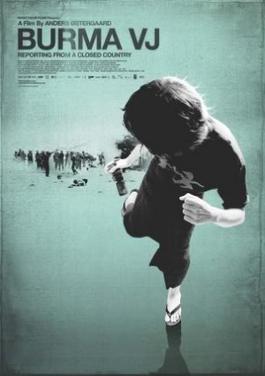 Burma VJ: Reporting From a Closed Country
Directed by Anders Østergaard. 2008. 84 minutes. In Burmese and English with English subtitles.

Many of the images in “Burma VJ: Reporting From a Closed Country” are shaky and blurred, captured with video cameras small enough to be quickly concealed in circumstances of danger and chaos. The lack of cinematic polish emphasizes the urgency of these pictures and the bravery of the anonymous camera operators — “VJ” stands for “video journalists” — who risked their safety, their freedom and their lives to record popular protests against the military government of Myanmar and the regime’s brutal response. Directed by Anders Ostergaard, a Danish filmmaker, this documentary is largely a collage of those clandestine videos, recorded in August and September 2007 and narrated by a Burmese pro-democracy activist known as Joshua, whose face and identity are shrouded for his own protection. “Burma VJ” is a rich, thought-provoking film not only because of the story it tells, which is by turns inspiring and devastatingly sad, but also because of the perspective it offers on the role that new communications technologies can play in political change.

They Call it Myanmar: Lifting the Curtain
Directed by Robert H. Liberman. 2012. 84 minutes.

Shot clandestinely over a two year period, this film provides a rare look into the second most isolated country on the planet held in a stasis by a brutal military regime for almost a half century. From over 100 interviews of people across Burma, including the recently released Aung San Suu Kyi, interwoven with stunning footage of Burmese life this documentary is truly unique.

Punk in Myanmar – that is a provocation itself. After all, here in the former military dictatorship the probably most rebellious of all subcultures faces one of the world’s most authoritarian regimes. For young Burmese, punk is a way to stand up against a hated government. In their songs, they criticize the appalling living conditions in Myanmar and call for freedom and human rights. In the 90's, sailors brought the first punk rock cassettes into the isolated country. Since then a scene with several hundred followers has emerged in Yangon.

The film "Yangon Calling" introduces the main protagonists of the punk rock scene and shows their life in Myanmars's underground. During six weeks, the filmmakers Alexander Dluzak and Carsten Piefke filmed secretly and without authorization in Yangon, using small cameras. They accompanied the punks to their homes and met their friends and families. They went along with them to work in the tailor shop and tattoo studio, to rehearsal rooms and secret illegal concerts. They spoke with punks who had sat in jail during the military dictatorship and saw them fight their frustration with heroin.

Yangon Calling is a film about life in an authoritarian state, about personal tragedy and the struggle for freedom in a country where punk is still true rebellion.