At this meeting in Honolulu, Kānaka Maoli discussed what the annexation of Hawaiʻi would mean for them and what actions they could take against it. 1897 was a year of strong resistance against the colonial powers of the United States for the Hawaiian people. It was a cumulation of kūʻē against the continued injustices of an illegal overthrow of the monarchy and systematic attempts to silence the lāhui. The people of Hawaiʻi gathered together at the Palace Square, steadfast in their resistance. Prominent leaders like Queen Liliʻuokalani, James Kaulia, Joseph Nāwahīokalaniopuʻu, Abigail Kuaihelani Maipinepine Campbell, and many others prompted the people to take a stand. This story of Hawaiʻi’s annexation is not a silent one, but one of a battle fought long, hard, and justly with aloha from and for Kānaka Maoli.

In the years leading up to 1897, the sovereignty of the Hawaiian Kingdom and of the lāhui was in distress. In 1887, the Bayonet Constitution was forced onto King Kalākaua, which limited political power from the monarchy and restricted voting rights. Queen Liliʻuokalani was forcefully overthrown in 1893 and attempts to restore power by kānaka political leaders through rebellions were not successful. This inspired kānaka to form political groups of their own, such as the Hui Kālaiʻāina and the Hui Aloha ʻĀina to restore aliʻi and kānaka political power. Queen Liliʻuokalani, even though she was imprisoned in her own home and forced to abdicate the throne in 1895, never lost hope that she and the Hawaiian Kingdom would see justice. She writes in a letter sent July 1897 regarding annexation to the new U.S. president William McKinley, "[I] assure you of my unfaltering trust that the Almighty Ruler of the Universe may guide your councils into the ways of justice to all and peace to those most interested" (Liliuokalani, para 2). She trusted that if they fought annexation peacefully and democratically, following the rules of the western government, independence would be restored.

William McKinley at the time was open to the idea of annexing Hawaiʻi. In June 1897, he sent the annexation treaty that the Republic of Hawaiʻi leaders drafted and lobbied to the U.S. Senate. In turn "the Hui Aloha ʻĀina for Women, the Hui Aloha ʻĀina for Men, and the Hui Kālaiʻāina, along with the queen, formed a coalition to oppose the treaty" (Silva, 146). They organized mass meetings and mass petition drives to which hundreds of thousands of citizens attended. Their objective was to oppose the annexation using the same democratic means that the United States abides by. On September 6th in the mass meeting at the Palace Square, President Kaulia said, "'Aole loa kakou ka lahui e ae e hoohuiia ko kakou aina me Amerika a hiki i ke Aloha Aina hope loa' (We, the nation [lāhui] will never consent to the annexation of our land to America, down to the very last Aloha ʻĀina)" (Silva, 146). And so, they sailed. The men's branch, women's branch, and the Hui Kalaiʻāina voyaged to each island, organizing mass petition drives. A total of 38,000 signatures was collected, undeniable proof that the people of the Hawaiʻi did not consent to the annexation of their home.

Finally in December of 1897, ʻelele lāhui (national delegates) from the three hui arrived in Washington D.C. to present the petitions to the U.S. Senate. The Hui Kālaiʻāina’s petition was for the restoration of the monarchy, which numbered 17,000 signatures, while the Hui Aloha ʻĀina’s petition to protest the annexation numbered around 21,000 signatures. The delegates, in consultation with Queen Liliʻuokalani, agreed to submit the Hui Aloha ʻĀina’s petition in order to present a united front. They spent three months persuading and winning the empathy of senators and congressmen against annexation. The ‘elele lāhui left Washington D.C. in February 1898 with a sense of confidence. The U.S. Senate had only 46 votes for annexation; 60 was needed. The annexation treaty failed to get enough votes.

With pressure from the Spanish-American War, the U.S. Congress ignored the failed annexation treaty and international law. Using their own U.S. domestic law, they passed a joint resolution in July of 1898, the Newsland Resolution, to illegally annex Hawaiʻi into the United States. On August 12, 1898, the American flag was raised over ʻIolani palace. It is said cries echoed throughout the islands of Hawaiʻi.

Thanks to the effort of Nālani Minton and Dr. Noenoe Silva, we have access to the Hui Aloha ʻĀina’s petitions today; evidence that some 21,269 of our kūpuna were against America’s unlawful annexation of the pae ʻāina. It lay dormant in the U.S. National Archives before a complete copy was returned to Hawaiʻi in 1998. Those pages are no longer lost in history and their valor is not forgotten. These pages are evidence of the mana of our kūpuna and that mana is present in kānaka maoli today. Kānaka since then, have and will continue to protest the illegal seizure, occupation, and the abuse of Hawaiian lands in the same righteous manner of those ancestors who signed the petitions in 1897.

Liliuokalani to William McKinley (U.S. President), July 24, 1897. The Annexation of Hawaii: A Collection Of Documents. University of Hawai‘i at Mānoa Library, https://libweb.hawaii.edu/digicoll/annexation/protest/liliu6.php.

About this digital collection

It is with much aloha for the lāhui that the Hawaiian Collection at the University of Hawaiʻi at Mānoa makes this new digital collection of the Kūʻē petitions available. This project would not be possible without our Native Hawaiian Student Services Kekaulike undergraduate intern who researched the Kūʻē petitions, wrote the introduction, and carefully sorted the 559 page pdf of the petitions into the places across this pae ʻāina that those signatures represent. The introduction into this digital collection, “No ke kue mau loa ana aku…” is a reminder of this history and of the everlasting mana and aloha ʻāina of our kūpuna who, through their signatures signed over 125 years ago, continue to protect the ea of this pae ʻāina. This legacy is our kūʻē mau loa, our lasting kūʻē to continue to fight for what we know is right. Ua mau ke ea o ka ʻāina i ka pono. The sovereignty of the land is perpetuated in righteousness.

This new digital collection of the Kūʻē petitions is an update to the original collection of black and white scans that the Hawaiian Collection created in the 2000s to provide unprecedented electronic access at the time. The color scans in this new collection were downloaded from the U.S. National Archives catalog where the Kūʻē petitions are available as a 559 page pdf. The individual petitions pages are grouped by the places written on them. When a place was not written, we grouped it with the petitions that preceded it. Links to historic survey and postal maps were added for each island to make it easier to see where these places are, the place names used, and how people moved from place to place at the turn of the 1900s. Because the places written on the petitions were sometimes district names, ahupuaʻa names or even specific place names, we added ahupuaʻa or district names when necessary to better organize the petitions by the places they represent and the places we saw on the historic maps.

This digital collection is designed to be a space of connection and to be a space to spark conversations about the Kūʻē petitions and what it means for us today as a lāhui past, present and future. The "Readings & Videos" page are a combination of key books, articles, videos and websites about the Kūʻē petitions. These resources were intentionally selected to highlight those that are freely available online as open access resources. The annotations are carefully written to highlight the importance of the resources and explain how each contribute to our understanding of this legacy of mana, aloha ʻāina, and kūʻē. We hope this collection speaks to you. 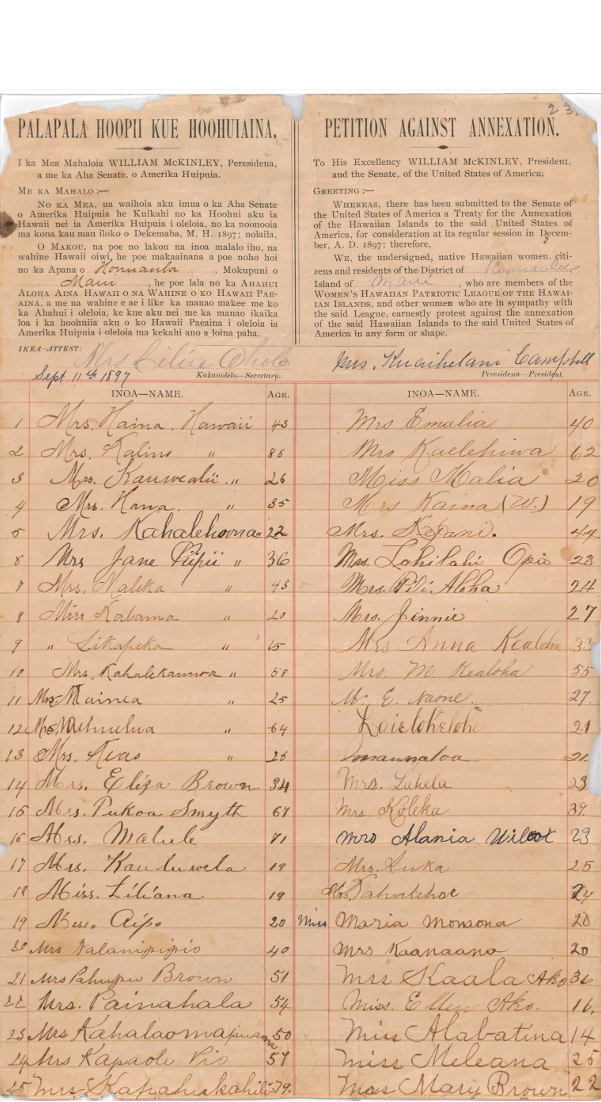 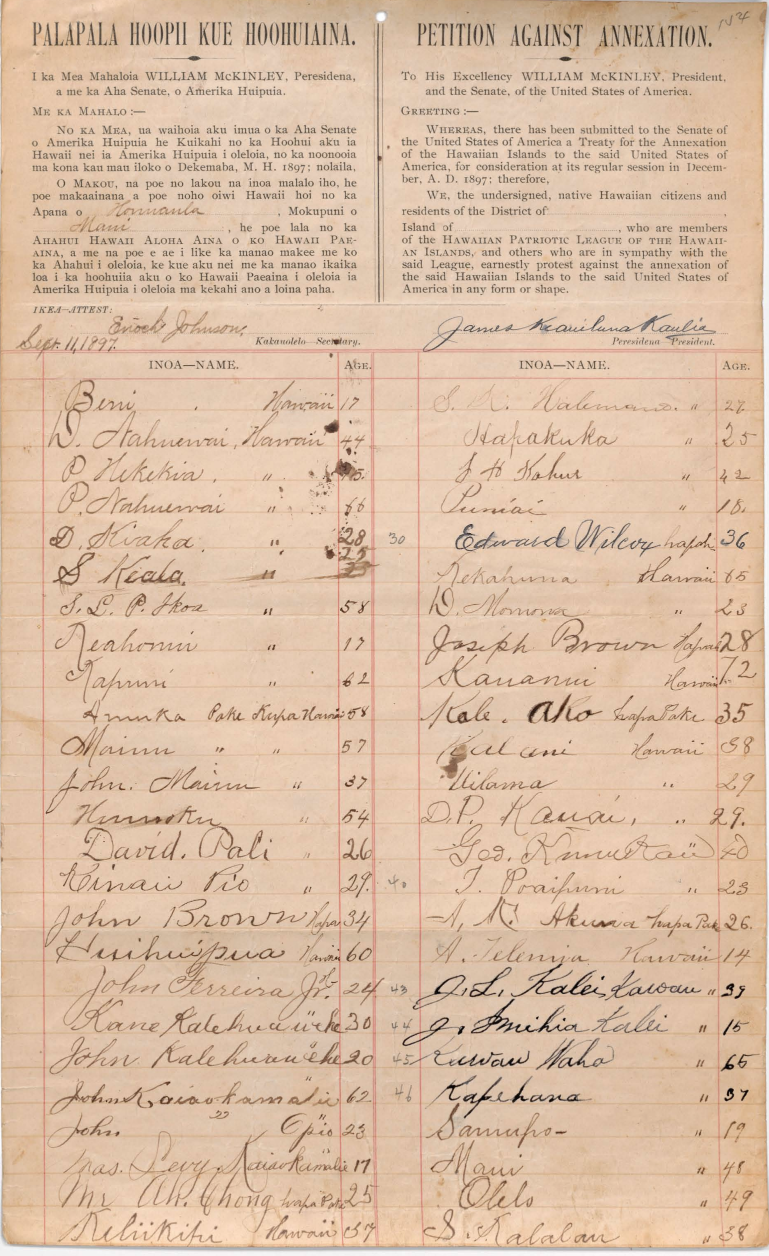