Celebrating the Centenary of the May Fourth Movement, 1919-2019 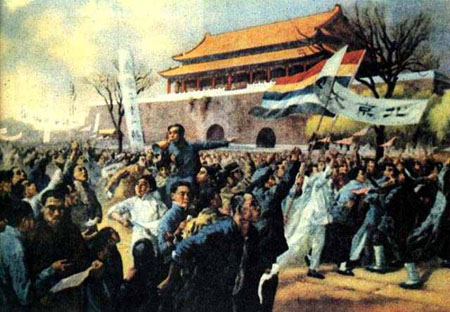 The Qing Dynasty was overthrown in 1911. The end of the imperial era led to a dynamic but also politically, socially, and culturally unstable era. China’s intellectuals and public leaders argued that China’s failure to modernize more successfully was caused by both external and internal factors. Hence the call to create a “new culture” that could kick-start China’s overall development.

This movement was further galvanized by large public protests on May 4, 1919 which were held in response to the unfavorable terms of the Treaty of Versailles that ended World War I. The May Fourth Movement (or New Culture Movement) which began in 1919 grew to encompass a variety of rallying cries, among them education, the embrace of science and social progress, popular literacy, socialism, feminism, and democracy.

Political Context of the May Fourth Movement

The May 1919 demonstrations had many points of inspiration, but the most immediate context was the political situation in China in light of the system of unequal treaties. Beginning with the first Opium War of 1842, China was forced under threat of military invasion and potential colonization to sign a series of unfavorable treaties with Western nations, including Great Britain, France, Germany, Italy, the United States, and Japan. These treaties gave extraterritorial jurisdiction for foreigners in China, and gave foreign governments control over profitable and strategically important railroads, mines, and communications infrastructure. Foreign governments were also given the right to establish territorial concessions in Shanghai and Tianjin. Germany by treaty was given the right to a 99-year lease of the coastal province of Shandong.

During World War I (1914–1918) China joined the Allied side and sent some 140,000 non-combatants to support the war effort in France. In 1915 Japan, which had stationed over 50,000 troops in Northeastern China, compelled China to agree to a new unequal treaty, the so-called 21 Demands, which included the transfer of German concessions in Shandong to Japan. The leadership of China at that time agreed to most of the demands, including the right of Japan to receive German territories. During the Spring 1919 peace negotiations after the end of World War I, Chinese delegates to the peace talks lobbied their victorious allies to regain sovereignty in Shandong. The Allied powers backed Japan’s claims and in fact extended Japan’s rights to include control over railway lines in North China and right to Shandong in perpetuity.

News of these events arrived in China in late April. On May 2, an editorial was published in a large-circulation liberal newspaper announcing the disaster. On May 4, concerned students from thirteen Beijing universities had a meeting, declaring that “China’s territory may be conquered but it cannot be given away. The Chinese people may be massacred but they will not surrender.” Some 4,000 students, including many women, gathered that day in central Beijing, in front of the southern entrance to the imperial city called Tiananmen, the ‘Gate of Heavenly Peace.’ They carried banners reading “Do away with the ‘Twenty-One Demands,’” and “Don’t sign the Versailles Treaty.” Students were beaten and arrested by police. Soon after, people in cities across China launched sympathy protests, demanding that the Chinese government free imprisoned Beijing students and take action against imperialism, social conservatism, and autocracy.