Chronicling America: Historic Newspapers from Hawaiʻi and the U.S.: Leprosy

Chronicling America: Historic Newspapers from Hawaii and the U.S.

May 22, 1823: Reverend Charles C. Stewart may have seen leprosy victims in Hawaiʻi, as he wrote, "The inhabitants generally are subject to many disorders of the skin; the majority are more or less disfigured by eruptions and sores, and many are as unsightly as lepers."1835: A Hawaiian woman named Kamuli in Kōloa, Kauaʻi had symptoms of leprosy, known as the first documented case of leprosy in Hawaiʻi.December 13, 1850: Kamehameha III established the first Board of Health, which aimed to oversee the public health of the people of Hawaiʻi and to cure the people of epidemic diseases, especially cholera.

1860s: Leprosy spreaded quickly throughout the people in Hawaiʻi, causing alarm and panic. The disease disproportionately affected the Native Hawaiians.

1865: "An Act to Prevent the Spread of Leprosy" was passed and says that land is to be set aside for isolating leprosy victims. The state of Hawaiʻi bought 800 acres of land on Kalaupapa, Molokaʻi for that purpose.

January 6, 1866: The first group of leprosy victims with 16 people arrived at Kalawao for isolation.

May 10, 1873: A Belgian missionary priest originally named Joseph Damien de Veuster, Father Damien and his bishop arrived at Kalaupapa, where the Hawaiʻi government sent the leprosy victims in exile. Leading the community, Father Damien built a church and oversaw various improvement projects, including building homes and schools and organizing farms. Taking care of the community for the rest of his life, Father Damien encouraged the community to follow basic laws, constructed buildings and coffins, constructed a water system, planted trees, encouraged the government to provide more resources for the leprosy victims, and boosted people's morale. Father Damien's selflessness made him famous internationally.

September 15, 1881: Queen Liliʻuokalani visited the settlement. Afterward, she honored Father Damien with the Cross of the Royal Order of Kalākaua to recognize his “efforts in alleviating the distress and mitigating the sorrows of the unfortunate.”

1885: Kapʻʻolani Home for Girls opened to house the children of leprosy victims.

1886: Sent by the Board of Health, Dr. Masanao Goto arrived at Kalaupapa and tried a method of treating leprosy, which consisted of different medicines with hot baths. 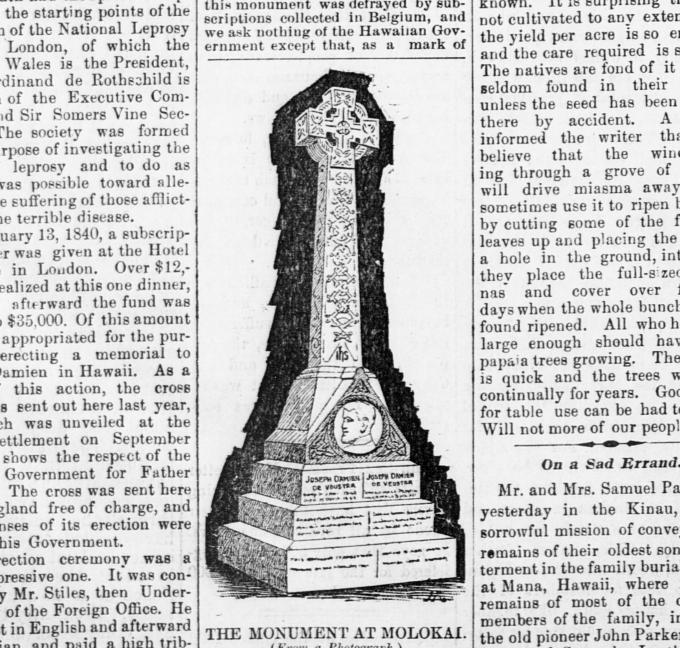 April 15, 1889: Father Damien passed away at age 49 from the leprosy he contracted through his 16 years of work on Molokai.

1946: Leprosy patients in Hawaiʻi began to receive treatment of sulfone drugs, which made the leprosy victims' leprosy go into remission and not be contagious.

1969: The Hawaiʻi Board of Health stopped the isolation of leprosy victims and ended the isolation laws. From 1866 to 1969, the Kalaupapa settlement received a total of about 8,000 people.

2009: The Catholic Church canonized Father Damien as a saint, naming him Saint Damien of Molokaʻi.

1. Enter "leprosy" and "kalaupapa" in the field "with all the words"

2. Enter "leprosy" and "hawaii" in the field "with all the words"

4. Enter "father damien" in the field "with the phrase"

5. Select "Hawaii" in the "Select state(s)" field and enter "leper" in the field "with any of the words"