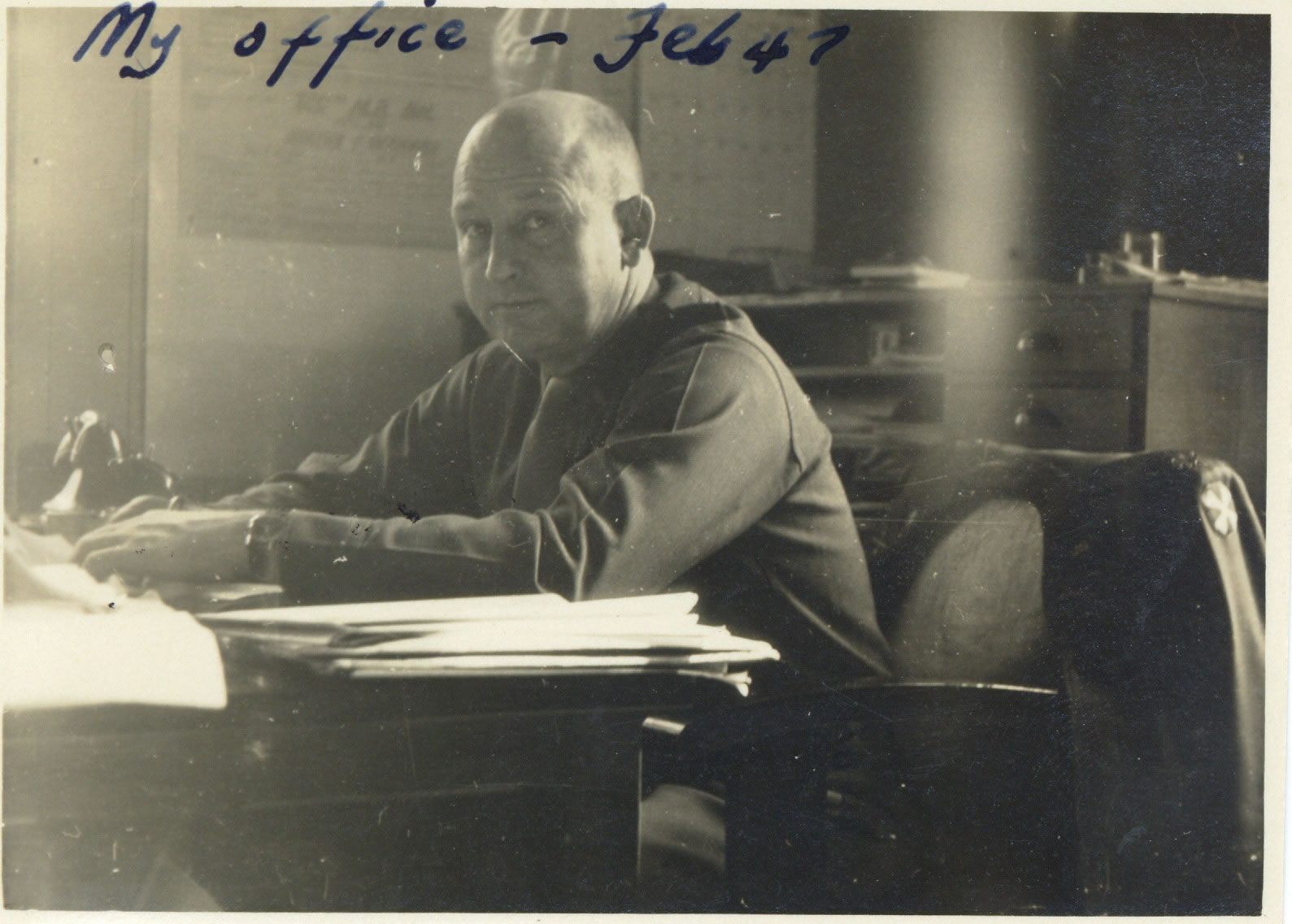 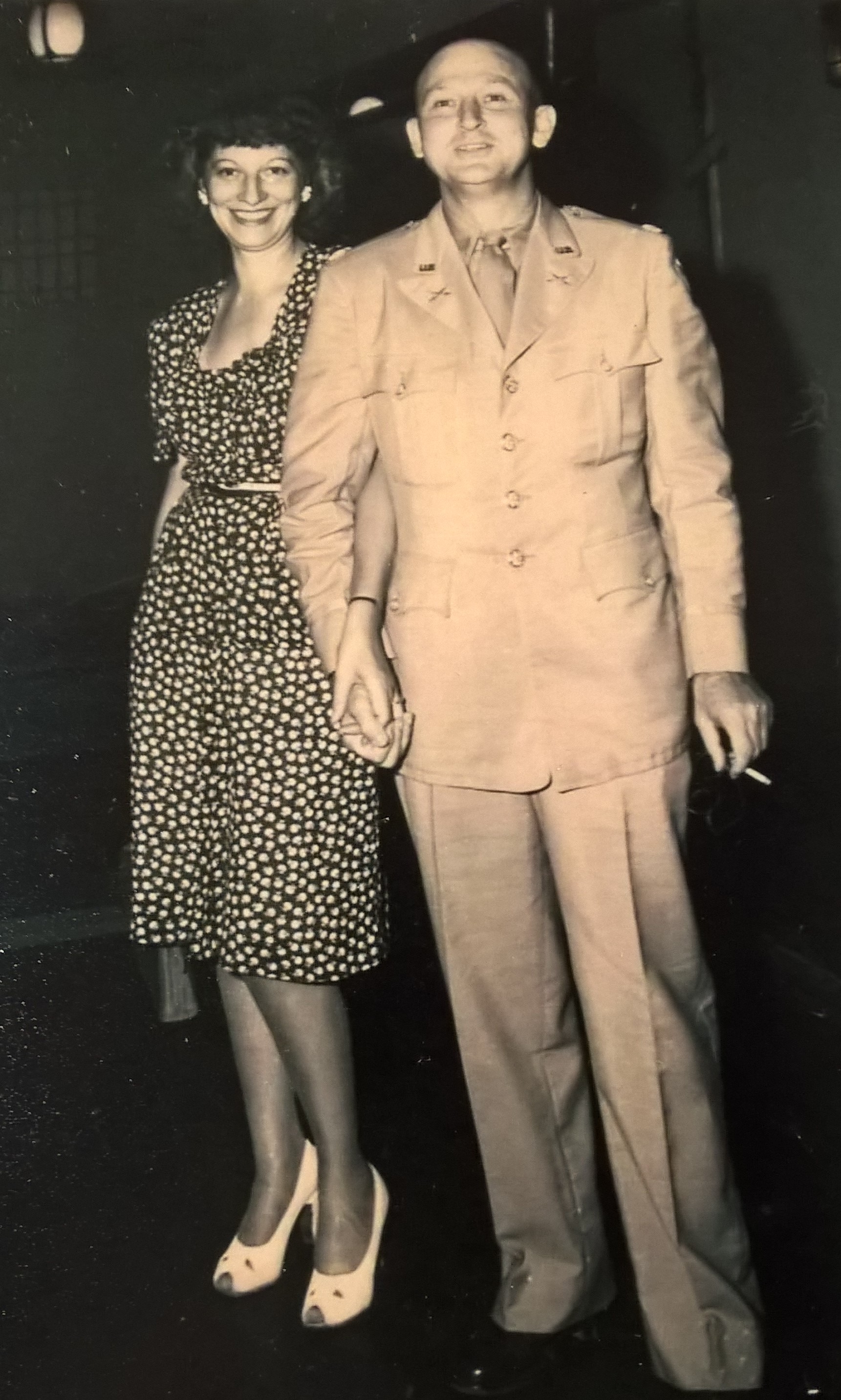 Emery D. Middleton was born in Orleans, Indiana and spent his formative years in Princeton, Indiana. He joined the Indiana National Guard at a young age in 1924. He attended Purdue University, Indiana, pursuing a degree in mechanical engineering. He was commissioned as a Second Lieutenant in the National Guard in 1937. Following activation of his National Guard artillery unit prior to World War II, he was eventually promoted to the rank of Lt. Colonel in the Artillery, US Army, in 1943. During this time period up to 1945, he served at various military bases in the US, including Camp Claiborne, LA; Fort Sill, OK; Camp Breckenridge, KY; Fort Leonard Wood, MO; Fort Sam Houston, TX; and Schofield Barracks, HI.

He participated in the planning and execution of the Okinawa campaign in the Pacific in 1945. Some photos donated to this collection depict scenes of the aftermath of this campaign.

In December 1945, Lt. Col. Middleton was assigned to serve as the Police and Liaison Officer at the headquarters of the 720th Military Police (MP) Battalion stationed in Tokyo, Japan. In this capacity, he made numerous contacts with local businesses and officials, as well as Japanese police units in Tokyo. In May 1946, he was assigned as Battalion Commander of the 720th Military Police unit. Later, in March 1947, he transferred to Sendai, Japan, serving as Assistant Provost Marshal of Ninth Army Corps headquarters. He departed Japan in August 1947 on the US ship, General Black, sailing from Japan to Germany with German repatriates from Asia.

During his service in Japan, Lt. Col. Middleton took many candid photos of the Japanese people, various Japanese locales, as well as photographs related to his military service there. He had the opportunity to meet certain Japanese persons and establish personal relationships with some of these individuals and their families. According to his daughter, he had high regard for the Japanese people, their courtesy and discipline.

While serving in Tokyo, Middleton met his future wife, Aileen Kerrigan. Miss Kerrigan served as a secretary to Joseph Keenan, Chief Prosecutor of the International Military Tribunal for the Far East in Tokyo. Several of the photos in the collection depict Ms. Kerrigan while in Japan. They were married at Fort Bragg, North Carolina in 1948.  Her brother, US Navy Senior Machinist Mate Raymond Kerrigan, was a casualty of the attack on Pearl Harbor, serving on the US repair ship, the Vestal. Raymond Kerrigan is buried at the National Cemetery of the Pacific in Honolulu.

Following his service in Japan, Middleton served in various posts in the US Army. These included the 82nd  and 18th Airborne Corps at Fort Bragg, NC; I Corps in Korea during the Korean Conflict;  Headquarters, Allied Land Forces, Southeast Europe, NATO in Izmir, Turkey;  Fifth Army Headquarters in Chicago, Illinois; and finally serving as Deputy Post Commander, Fort Sheridan, Illinois. He was promoted to Colonel in 1954.

After his retirement from the Army at the end of 1962, he relocated with his family to Columbia, South Carolina, where he lived until his death in 1983. He was survived by two children, Anne and Patrick. Among his military decorations are included two Legion of Merit Awards and Silver Oak Leaf Cluster.

Also, see his archival papers deposited in Purdue University Archives:
The Emery D. Middleton Papers (1930-1933; .25 cubic feet) contains personal belongings of Middleton during his time as a student at Purdue. The collection includes grades, printed material, a ticket stub for a 1934 football game between Purdue and Indiana University, and a map of Lafayette and West Lafayette. The collection also includes photos of the Sigma Pi fraternity house, members of the fraternity, and the cook and house mother.