Since March 2009 to December 2019, Sinclair Library has been digitizing many of its older videos, focusing on those in the Hawaiian and Pacific collections. Starting January 2020 the digitizing process moved to Hamilton Library. 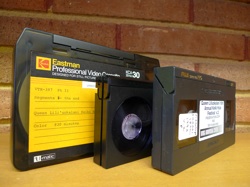 The library's copies of the Queen Lili'uokalani Keiki Hula Festival recordings are stored on U-Matic (left), Beta (middle), and VHS (right) tapes. They have now been digitized for online access.

Video formats have gone through many changes over the past few decades, and they're changing even more quickly now. Over time the library has acquired filmstrips, U-Matic tapes, Beta tapes, laserdiscs, VHS tapes, and now DVDs. Many of the tapes themselves are deteriorating, and the older formats are becoming obsolete. As the playback equipment ages it breaks more frequently, and it's not always possible to repair or replace it. This is a big problem for Hamilton and the researchers who depend on the library's collections, because the video material held here is extremely valuable, especially to scholars interested in Hawai'i and the Pacific region. 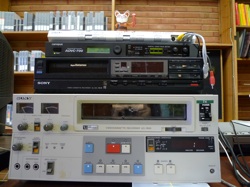 Under U.S. Copyright Section 108(c), Hamilton Library is reformatting as many of these older videos as possible. We use a Canopus A/D converter to digitize VHS, Beta, and U-Matic formats of videos. These digital versions are saved as archival digital copies, and from them we create smaller versions of videos that can be viewed over the Internet. 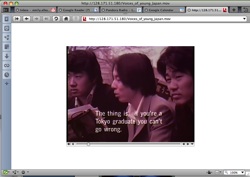 Screenshot of a digitized video being streamed. Most browsers - including Firefox, Internet Explorer, Chrome, and Opera - support streaming as long as QuickTime is installed.

We use QuickTime to create compressed versions of the archival digital copies. Once a streaming version is available, a link is added in the Voyager catalog so that members of the UH community can watch it online. To watch most videos, you must enter your UH username and password. A few links will take you to an external page with a list of streaming videos. QuickTime must be installed on your computer (free download at http://www.quicktime.com) for the video to play. 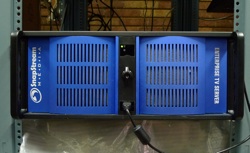 In the past we used VHS tapes to record local TV shows off-air, and we have built up a significant collection of unique material this way. We are now working to digitize these VHS tapes for online viewing as well. Beginning in October 2009, the off-air recording program switched from VHS to digital recordings via a SnapStream server, streamlining the process of reviewing these shows and adding them to our collection. Off-air recordings are available through OneSearch.