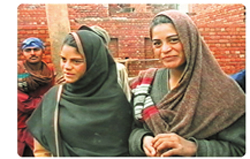 Inspired by organizers at the Beijing Conference on Women in 1995, former construction worker Vivian Price spent years documenting the current and historical roles of women in the construction industry in Asia – discovering several startling facts. Capturing footage that shatters any stereotypes of delicate, submissive Asian women, Price discovers that women in many parts of Asia have been doing construction labor for centuries. But conversations with these women show that development and the resulting mechanization are pushing them out of the industry. Their stories disturb the notion of “progress” that many people hold and show how globalization, modernization, education and technology don’t always result in gender equality and the alleviation of poverty.

Celebrating a range of women workers – from a Japanese truck driver, to two young Pakistani women working on a construction site in Lahore, to a Taiwanese woman doing concrete work alongside her husband – this film deftly probes the connections in their experiences. In a segment exploring the history of the Samsui women in Singapore (Chinese women who were recruited as construction laborers in the 1920's until they lost their jobs to mechanization in the 1970’s) unique archival footage and interviews with surviving Samsui offer an importation perspective on the historical and global scope of women workers’ struggles.