IMDb Most Popular Documentaries from Indonesia

See a listing of more than 200 documentaries from Indonesia.

Family Victim is part of a series of ethnographic films on severe mental illness in Indonesia, based on material drawn from 12 years of person-centered research by director and anthropologist Robert Lemelson. The film focuses on Estu Wardhani, a young Javanese man from a highly respected family. Initially, Lemelson focuses on Estu's neuropsychiatric symptoms. Over time, interviews with Estu, his family, and traditional healers, who describe him as "different," "hardheaded," "lazy," "spoiled," "psychopathic," and controlled by a spirit, reveal a more complex dynamic as his erratic behavior worsens and his marriage deteriorates. Only after the illness and death of his father and the birth of his second daughter does Estu begin to "live properly." Family Victim addresses the universal issue of how families and communities interpret and attempt to control the behavior of troubled and troublesome members. Family Victim examines the bi-directional influences between an individual considered to have a disruptive or troublesome personality and his social world. 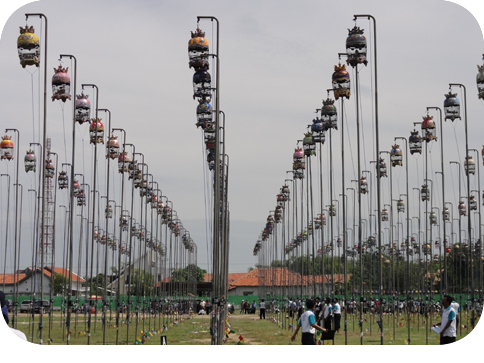 In a peculiar travelogue, two filmmakers dive into an ancient rite of manhood in Islamic Java - the tender and raucous sport of the singing doves, "the Indonesian NASCAR." Filmmaker Kian Tjong brings codirector Jim de Sève to his native Indonesia, home of the world's largest Muslim population. They dive into the midst of Muslim men to film singing dove competitions. Mandove follows the magical perkutut birds, casting spells on men, taking them away from their wives, and pitting them against each other to prove their masculinity. With its rich human diimension, it is one of the most unusual bird documentaries ever made.

The Act of Killing
Directed by Joshua Oppenheimer, Anonymous, and Christine Cynn. 2012. 115 minutes.

The Look of Silence
Directed by Joshua Oppenheimer. 2014. 103 minutes.

The Look of Silence is Joshua Oppenheimer’s powerful companion piece to the Oscar®-nominated The Act Of Killing. Through Oppenheimer’s footage of perpetrators of the 1965 Indonesian genocide, a family of survivors discovers how their son was murdered, as well as the identities of the killers. The documentary focuses on the youngest son, an optometrist named Adi, who decides to break the suffocating spell of submission and terror by doing something unimaginable in a society where the murderers remain in power: he confronts the men who killed his brother and, while testing their eyesight, asks them to accept responsibility for their actions. This unprecedented film initiates and bears witness to the collapse of fifty years of silence.