Video Message from Hawaii to Latin America: Movie Made By Thomas Taro Higa

An even flyer by the Okinawan Prefectural Archives suggest that Thomas Tarō Higa (比嘉太郎; hereafter spelled as Taro Higa, a convention in English spelling) made a video titled "Hawai ni ikiru [ハワイに生きる] = Life in Hawaii [sic] = Okinawans 65 year Documentary" in 1969. 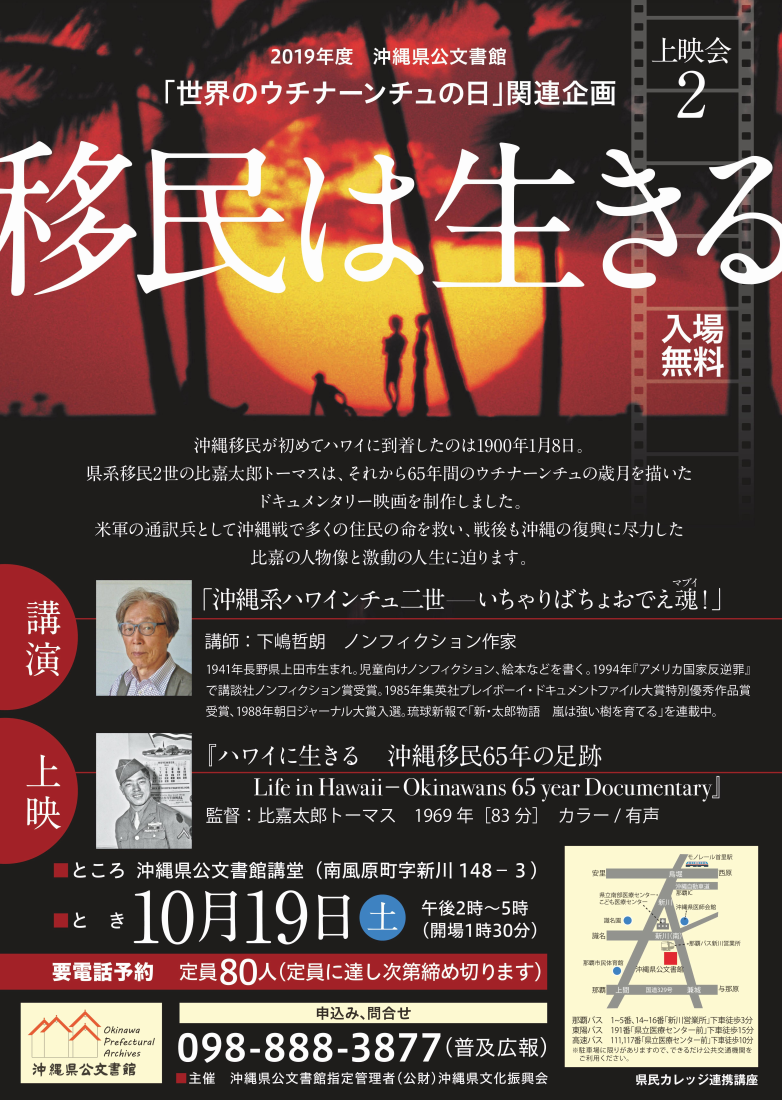 The movie Higa made is included in the following YouTube video clip.

The YouTube video includes a brief clip of Higa's 1969 film to explain how Igei contacted Higa and sought permission to show Higa's 1969 film--film about the Okinawan immigrants in Hawai'i--in Latin America.

According to Densho Encyclopedia, Taro Higa

"was a 100th Infantry Battalion veteran who conducted a lecture tour between June 1944 and January 1945 under the sponsorship of the War Relocation Authority (WRA), the Department of the U.S. Army, and the Japanese American Citizens League (JACL) to combat rumors that Japanese American soldiers were being used as human shields."

Higa is also remembered both in Hawai'i and in Okinawa for his support of the Okinawa Relief Effort, known as "the Pigs from the Sea." The document issued by the Okinawa Prefectural Government states:

The ravages of the Pacific War brought disaster and catastrophic damage to the island of Okinawa. Under these harsh conditions, the people of the island were forced to eke out a living, even as they struggled to find food amidst the scorched landscape. News of the devastation in Okinawa was conveyed to Hawaii via returning soldiers and wartime translators from the U.S. military. The testimony of Taro Higa in particular, who had taken part in the Battle of Okinawa, stirred the hearts of the Hawaiian Uchinanchu (Okinawan) community. 'The island is devoid of people and the furu (pig pens) are empty.' An indispensable source of food, Okinawa contained over 100,000 pigs in the prewar period. After the war, this number had plummeted to just 7,731 (according to the Ryukyu Government’s 1946 records), leaving Okinawa in a dire situation. Seeing that their ancestral homeland was in tragic shape and in need of aid, the Uchinanchu of Hawaii worried for their home towns and wondered if there was any way that they could help the island’s recovery. As a result, a large number of relief foundations were established.

Higa's film is available at the Okinawa Prefectural Library in Okinawa, Japan.

Enter your e-mail address to receive notifications of new posts by e-mail.