Welcome to the Philippine Boats and Navigation Page

"The Philippine Indigenous Outrigger Boat: Scaling Up, Performance and Safety" by Glenn D. Aguilar in Marine Technology Society Journal vol. 40, no. 3 (August 2006): 69-78.
*Physical copies up until 2012 of the journal are available at Hamilton Library [GC1.J63].  The electronic version is available in the library's Electronic Resources for issues from 2013 on.
"Types of watercraft in the Philippines" by R.E. Galang in Philippines Journal of Science vol. 75 no. 3 (1941).
*Physical copies of the journal is available at Hamilton Library [Q75.P51].  Holdings before 1950, such as this cited issue, are housed in Sinclair Library.

Balangay/Butuan Boat
The balangay was the first wooden boat that was excavated in Southeast Asia.  These boats were instrumental in the settlement of Austronesian peoples in the Philippines and the Malay archipelago.  It was used for cargo and trading, in which Butuan, Agusan de Norte, Philippines was a central trading port.  Today, the Balanghai Festival in Butuan is a celebration of the first people who settled in the Philippines.
"The Butuan Two Boat Known as a Balangay in the National Museum, Manila, Philippines" by Paul Clark, Jeremy Green, Tom Vosmer and Ray Santiago in The International Journal of Nautical Archaeology vol. 22, no. 1 (1993): 143-159.
**Physical copies are available in the library [CC77.I58].  The electronic version is available on the library's Electronic Resources.
Karakoa
The karakoa is a traditional Visayan warship made without nails.  It is known to be about three times as fast as a Spanish galleon.

“The World of Amaya” by Patricia Calzo Vega; GMA News, June 1, 2011.  This is an article about the karakoa built for the "Amaya" TV series, a Philippine historical fiction and period drama series set in the Visayas.

“Chika Minute: Amaya, ‘dilang basta seryeng pantelebisyon;” GMA 7, May, 25, 2011.   A two-minute clip which includes an interview of Dr. Neil Santillan of the University of the Philippines-Diliman History Department who briefly describes the similarities/differences between Southeast Asian and Polynesian canoes, among other things in the “Amaya” TV series.  In Tagalog.

For those interested in watching the "Amaya" TV series, it is available in DVD from the Sinclair Library Wong AV Center.  Click here for the bibliographic record.

Paraw
The paraw is a traditional Philippine outrigger canoe sail boat in the Visayas that transports cargo and passengers.  Paraw sailing is a tourist attraction, especially in Boracay and Iloilo, where the Iloilo Paraw Regatta Festival is held annually since 1973.
Palawan Paraw: A Blog Documenting the Construction of a Traditional Filipino Sailboat
This paraw building project aims to revive the tradition of paraw sailing, navigation and boat-building in Palawan.  The project is also intended to teach locals to preserve the marine environment, especially in decreasing the dependence of oil to fuel modern boats.
Vinta
The vinta is a variant of the Visayan paraw.  The difference is the type of sail rather than the hull.  These boats are used off the coasts of Zamboanga and throughout the Sulu archipelago.

"The Recovery of the 12th Century Wooden Boats in the Philippines" by Orlando V. Abinion in Bulletin of the Australian Institute for Maritime Archaeology vol. 13, no. 2 (1989): 1-2.
*There are no physical or electronic holdings of this journal.  Please contact the Interlibrary Loan Office.

Soul boats are part of a pre-colonial burial ritual in which the soul of the departed is sent across the ocean on a boat to the afterlife.

“The Soul Boat and the Boat-Soul: An Inquiry into the Indigenous ‘Soul’” by Maria Bernadette L. Abrera.

“The Boat-Coffin Burial Complex in the Philippines and Its Relation to Similar Practices in Southeast Asia” by Rosa C.P. Tenazas in Philippine Quarterly of Culture and Society vol. 1, no. 1(March 1973): 19-25.
*There are no physical or electronic holdings of this journal.  Please contact the Interlibrary Loan Office.

“Traditional Marine Practices in Indonesia and Their Bearing on Conservation” by Nicholas V.C. Polunin in Culture and Conservation: The Human Dimension in Environmental Planning edited by Jeffrey A. MacNeely (1985): 155-178.
*The library does not have a copy available.  Please contact the Interlibrary Loan Office.

The Sama, or Bajao are an indigenous ethnic group who live as maritime nomads in small, wooden sailing vessels.  They are from the Sulu archipelago, coastal areas of Mindanao and northern Borneo.

"Bajau Lepa and Sope: A 'Seven-Part Canoe' Building Tradition in Indonesia by Nick Burningham in The Beagle: Records of the Museums and Art Galleries of the Northern Territory vol. 10 (June 1993): 193-220.
*The library does not have a copy of this item.  Please contact the Interlibrary Loan Office.

“Sea Gypsies Losing Out – Philippines” uploaded on YouTube by Journeyman Pictures on May 4, 2011.

"Human Planet: Oceans," published on August 21, 2012 by the BBC, is an hour-long episode about various cultures and their connection to the sea.  This link leads to the "Human Planet" webpage on the "Oceans" episode.   Both the Bajaus and the Pa-aling fishermen are featured.  This episode can be viewed on YouTube.

"Remarks on the terminology of boatbuilding and seamanship in some languages of Southern Sulawesi" by Horst Leibner in Indonesia Circle. School of Oriental & African Studies. Newsletter, vol.21 no. 59 (1992): 18-44.
*There are no holdings for this journal.  Please contact the Interlibrary Loan Office.

Seafaring in the Contemporary Pacific Islands: Studies in Continuity and Change edited by Richard Feinberg (1995).[GN662.S43 1995]

"Trading Ships of the South China Sea: Shipbuilding Techniques and their Role in the History of the Development of Asian Trade Networks" by Pierre-Yves Manguin in Journal of the Economic and Social History of the Orient vol. 36, no. 3 (1993): 253-280.

Andy Smith Boatworks is a franchised yard company in Bohol, Philippines that customizes Wharram Catamarans.  It has a close relationship with James Wharram Designs, which specializes in self-build boat designs, including "traditional ethnic" models.

Bangka Journey.  A project by a group of Filipinos and Filipino-Americans as well as mixed heritage Native American/Filipino in the San Francisco Bay Area to reawaken traditional Philippine boat building and sailing as a means to connect people (across the Filipino Diaspora and with indigenous groups) as well as demonstrate sustainable living on the waterways.

Indigenous Boats: Small Craft Outside the Western Tradition.  This is the blog by Bob Holtzman of Rockport, Maine who holds a master's of Marine Affairs degree and has been involved with boats, including writing and editing materials about the subject.  The blog is about the various water vessels from different traditions, including Hawaiian, Native American, Chinese and Indonesian.  This is the blog page for posts about Philippine boats.

Voyage of the Balangay.  This Kaya ng Pinoy Inc. project was to build a replica balangay (Batuan boat) and navigate through the Southeast Asian islands, rekindling the traditional Philippine maritime practice.

In Search of the Philippines' Ancient Maritime Past in Taiwan!

On November 28, 2019, I fulfilled one of my dreams - to trace the origin of the Austronesian's maritime tradition in Taiwan, the birthplace of the great migration of the Austronesian-speaking people from Asia to the Pacific. Austronesians are people from island Southeast Asia such as the Philippines and Indonesia, Oceania, Madagascar, and the indigenous people of Taiwan.

My own journey to Taiwan began three years ago when Professor Jesse Liu, the driving force behind the revival of the ancient bamboo raft in Taiwan and Indigenous Taiwanese land rights activist, found me at the UH Hamilton Library reference desk. I might have talked his ear off about canoes in the Philippines. Since then, he never stopped reminding me of the importance of the Philippines in the Austronesian migration. 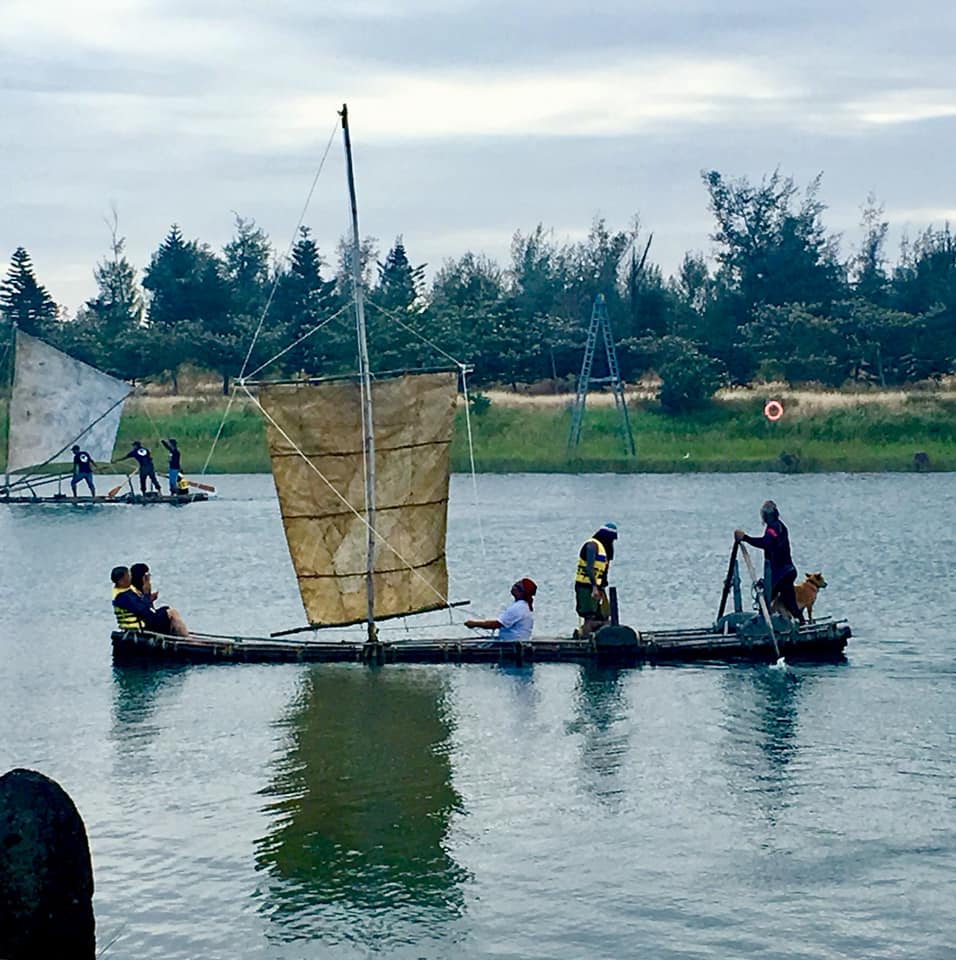 Fayang, bamboo raft with woven pandanus leaves sail created by the Amis people of Taiwan, at Flowing Lake, Taitung, Taiwan. It recreates a 30,000 - year old seafaring technology. Dr. Jesse Liu of National Taitung University asserts that these rafts may have been the founder canoes of the Austronesian-speaking people. 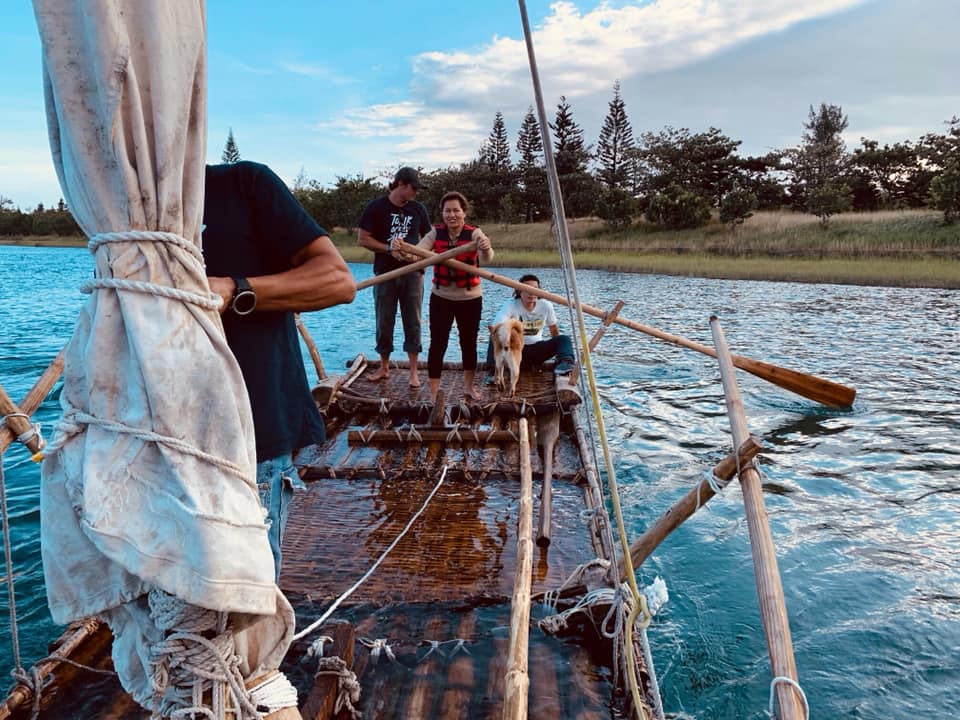 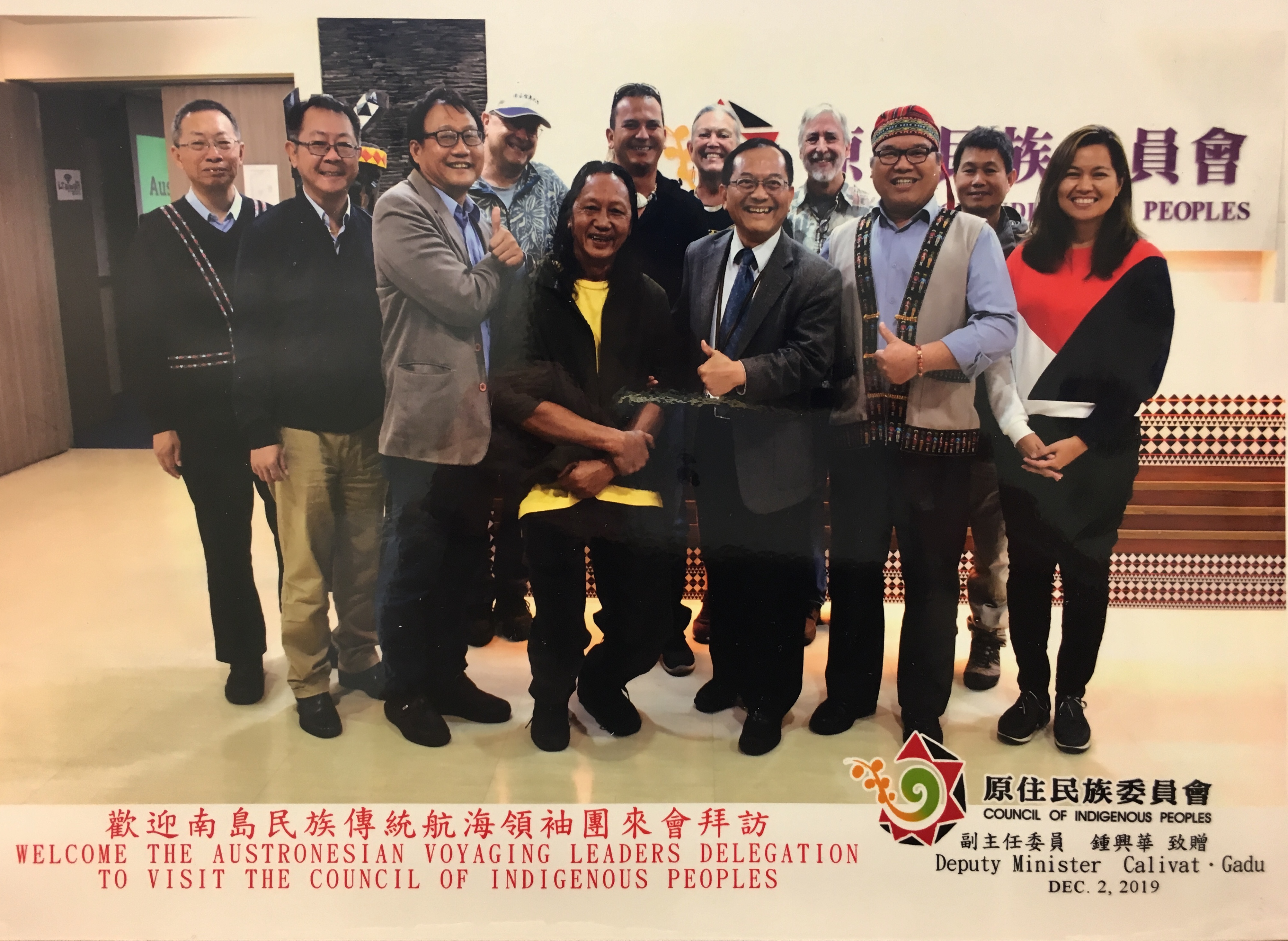 Official visit to the Taiwan Council of Indigenous Peoples in Taipei (2019). 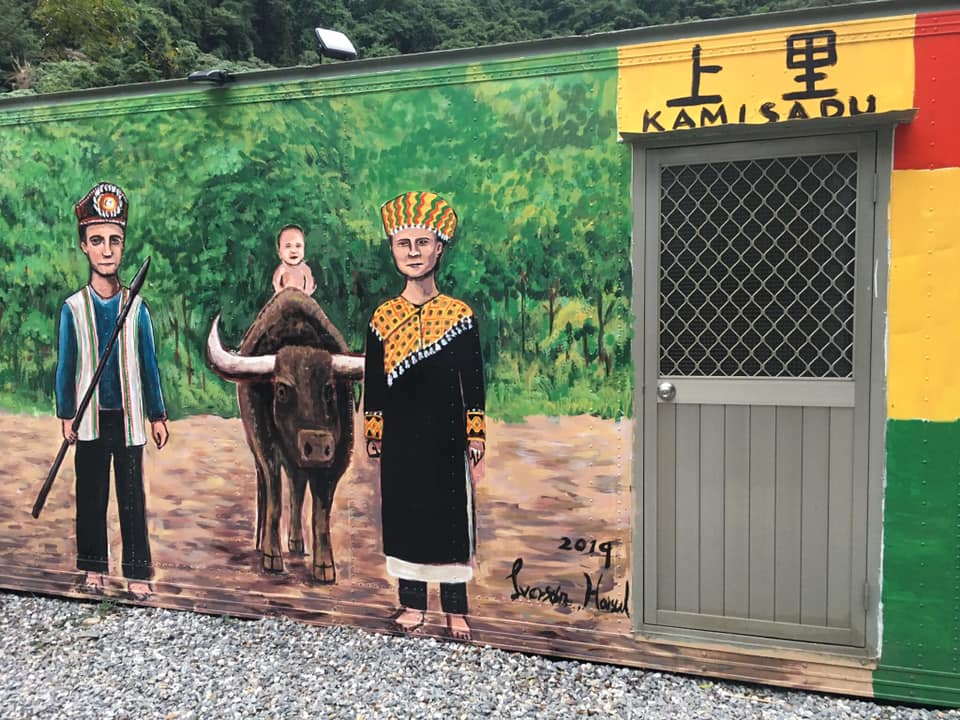 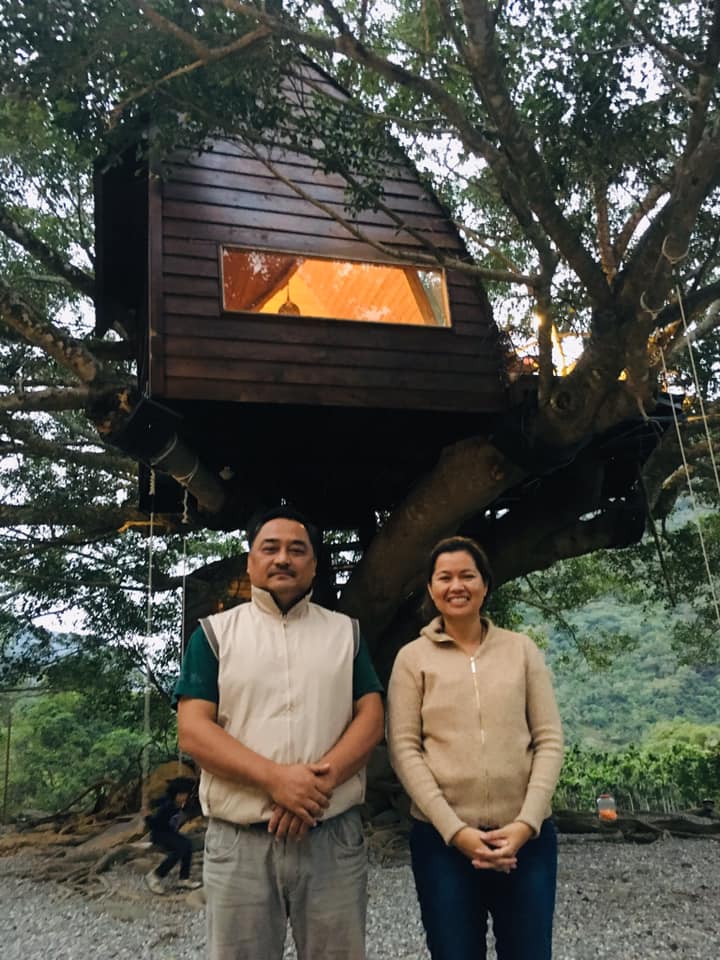 Visiting the Tao, Amis, Bunun, and other indigenous Taiwanese was like meeting family from 300 generations ago (4000 BC). We bonded over shared language (isa...one, dalawa...two, tatlo...three, baboy...pig, aso...dog, etc.), food, similar facial features, songs, dances, promises of visiting each other again, and lots of Taiwanese vodka and whiskey! 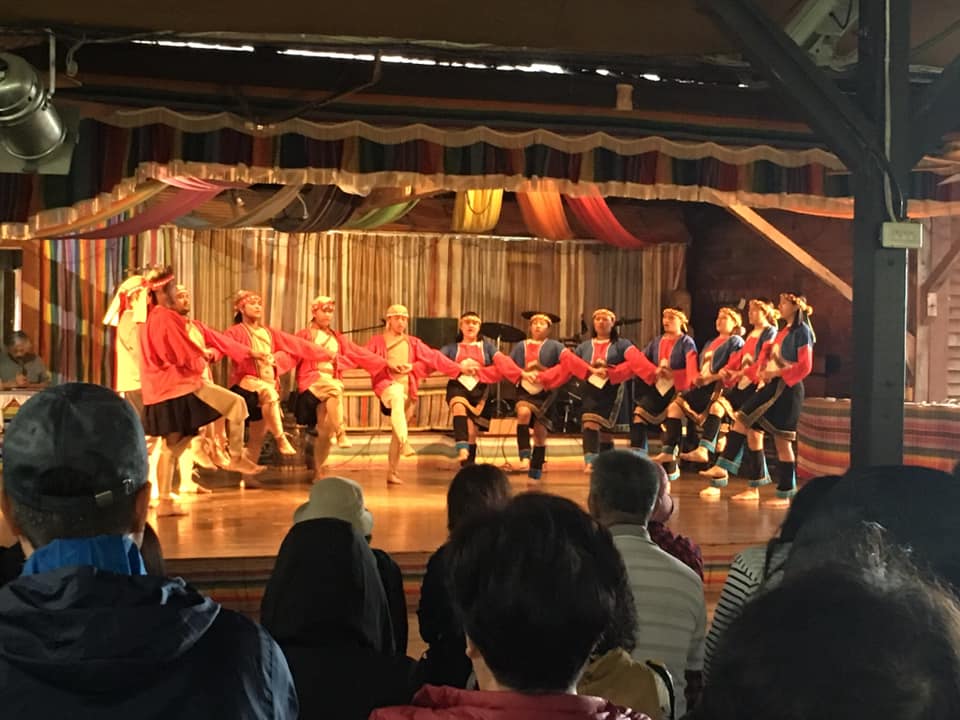 When a lot was lost in translation, we went back to the most basic of communication - affectionate touches, breaking fruits to share, warm hugs and smiles, sharing desserts, getting down on the dance floor indigenous Taiwanese style, hospitality, pantomime, kindness, generosity, and photographs! I’ve never laughed so much at a conference and dinners over silly new phrases like “shih shih too much” or “shih shih very much." Shih shih means thank you in Mandarin. These words summed up everything that we could not articulate in our language. Combine that with lots of food and spirits, and then it made perfect sense!