The personal papers of Juliette May Fraser contain biographical material relating to Juliette May Fraser and her frequent collaborator, David Asherman, in addition to original outgoing and incoming personal correspondence and diaries. The bulk of the correspondence dates primarily from the 1960s. A large part of the collection consists of Fraser's travel, research and subject notebooks, and sketch books spanning the 1940s through the early 1980s. The collection contains little material prior to the 1940s, leaving a wide gap from Fraser's graduation from Wellesley College in 1909 to her "Makahiki Festival" mural in 1939.

Juliette May Fraser (1887-1983), known as May, was a Hawaii artist and was born in Honolulu in 1887, during the reign of King Kalakaua when Hawaii was a kingdom. She graduated from Honolulu’s Punahou School in 1905 and earned a bachelor’s degree from Wellesley College in 1909. From 1910-1911 she taught history, English and Latin at Punahou. Later, she studied at the Art Students League in New York City and the John F. Carlson School of Landscape Painting in Woodstock NY from 1912-1914.

As an artist, she was a painter, muralist, printmaker and illustrator, and even designed a half-dollar coin for the U.S. Treasury in 1928 to commemorate Hawaii’s Sesquicentennial.  Her work is in the collections of the Smithsonian Institution, the Library of Congress, The Metropolitan Museum of Art, the Honolulu Museum of Art and state collections in Hawaii and California. In 1978, she received Hawaii’s highest arts honor, the Order of Distinction for Cultural Leadership. The Honolulu Printmakers selected her to create a member gift print for three of their annual exhibitions – 1942, 1966 and 1972.

In 2017, the Honolulu Academy of Arts (now the Honolulu Museum of Art) held the exhibition Camouflage Rhythms with oils and watercolors depicting another of Fraser’s talents. During World War II she was recruited to use her expert sense of design and color to create camouflage nets for the Army Corps of Engineers. She worked with lei sellers and fish net makers, out of work because of the war, to design and produce uncountable disguises for planes, tanks and other war materiel. She also saved scraps of cloth from this project and made a miniature Christmas creche, including a figure of a Hawaiian king and a Chinese nobleman in attendance at the manger.

She began painting murals in Hawaii in the 1920s and learned the technique for frescoes on wet plaster from Jean Charlot when he first came to Hawaii in 1949. Her murals are in several public buildings in Honolulu. During the Great Depression, Fraser was paid $35 a week to create a mural for the Hawaii State Library. When the funds were depleted, she continued to work on her own, producing ten murals altogether with images based on legends of Hawaii.

For the 1939 Golden Gate International Exposition in San Francisco, Fraser created the mural “Harvest Celebration” exhibited in the Hawaii Pavilion. Later, the mural was renamed “Makahiki Ho‘okupu” and is now in the entrance lobby of Hamilton Library at the University of Hawaii at Manoa.

She traveled extensively at various times, spending many months in Europe studying art. In Greece in the early 1960s, she painted murals in a tiny chapel on the island of Chios as a gift to the village of Vavyli.

Fraser was also a writer, including being the art critic for the Honolulu Star-Bulletin and the Honolulu Advertiser. Her book of linoleum prints depicting Hawaiian subjects, Ke Anuenue, was published in 1952 and won an award from the American Institute of Graphic Arts. May Fraser was widely known for her deep understanding and appreciation of native Hawaiian culture and history. 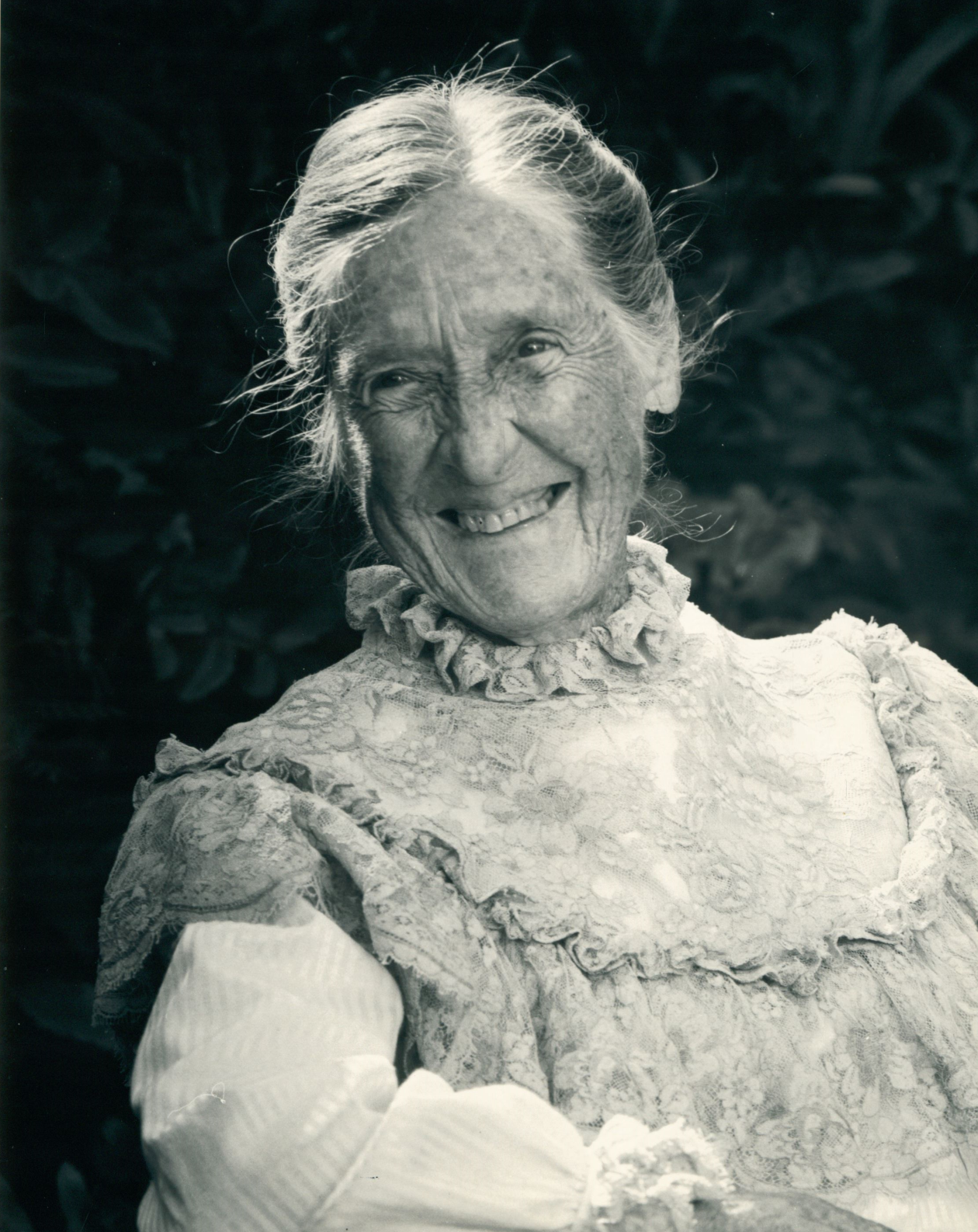 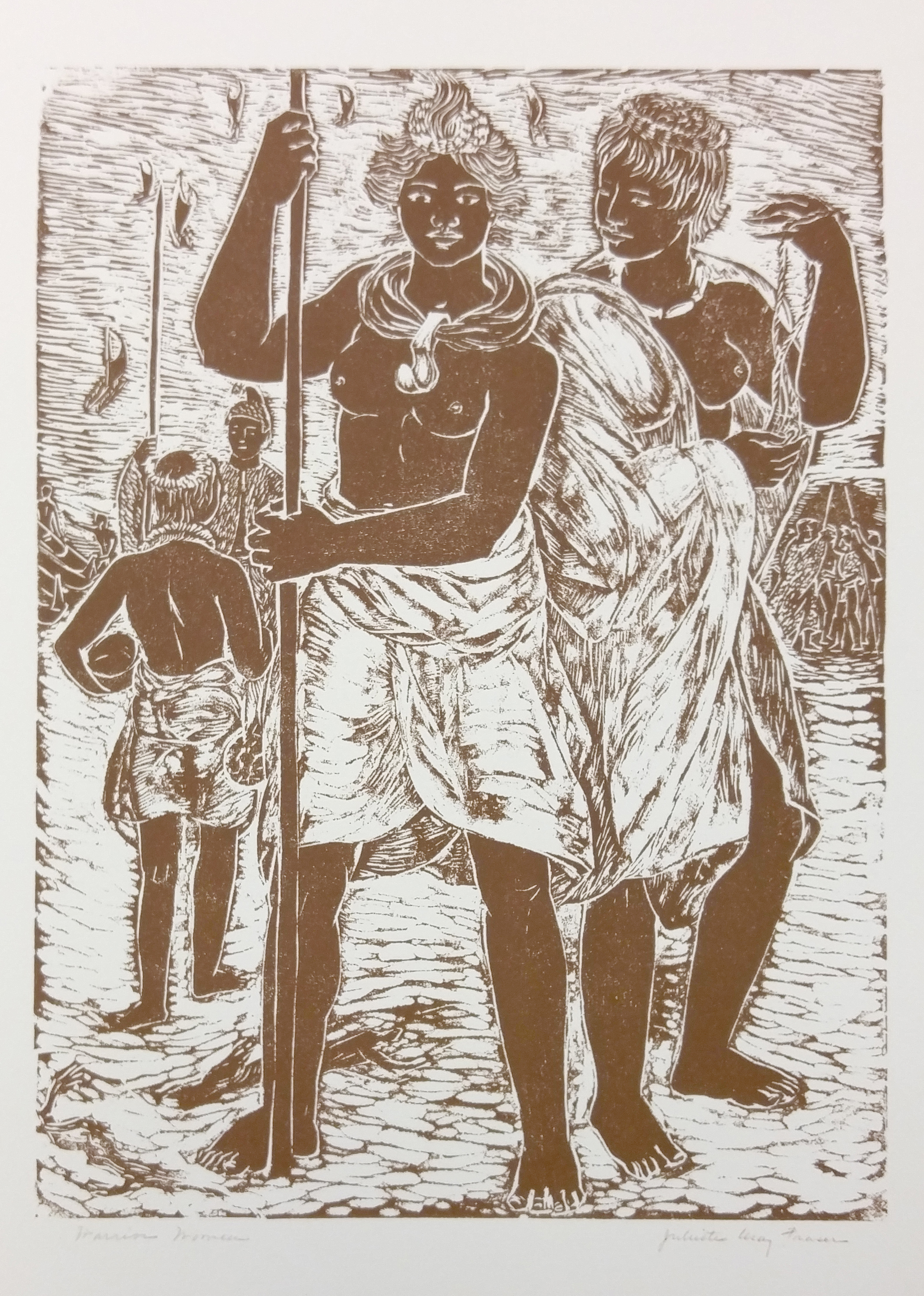 Warrior Women, linocut
by Juliette May Fraser
from Ke Anuenue, 1952