The papers of David Guy Asherman came to the University of Hawaii library together with the personal papers of Juliette May Fraser. The collection contains biographical material and original outgoing and incoming correspondence. The bulk of the correspondence dates primarily from the 1960s. Asherman's interest in Hawaii art organizations and galleries and his contributions are reflected in the papers.

David Asherman (1917-1983) was an artist and an art teacher. He was born in New York, attended the Art Students League of New York and later served on its board of directors. He also studied in Italy and France and graduated from New York's Friends Seminary, where he completed his first mural in 1933. He was vice president of the National Society of Mural Painters and president of Junior Members of the National Arts Club of New York. As a Kosciuszko Foundation exchange student to Poland in 1936, he studied at the universities of Krakow and Warsaw.

In World War II, Asherman served as an official war artist and writer for the Medical Department Information Service on General Douglas MacArthur's staff, taking part in the early assault waves of 18 D-Day landings. He retired as a major in 1948, after injuries sustained in a motorcycle accident.

Asherman painted extensively and his work appeared in national exhibits, museums and solo shows across the country. In 1951, he came to Hawaii to assist Jean Charlot in painting the fresco at the Waikiki branch of First National Bank (now First Hawaiian Bank). While attending the University of Hawaii, he completed a fresco in Bilger Hall at the University of Hawaii and another at Palama Settlement.

He taught summer classes at the Hawaii Youth Correctional Facility, encouraged and supported young artists in Hawaii, Samoa and Greece, and was a coordinator for the “Artists in the Schools” program of the State Foundation on Culture and the Arts. He was art critic for the Honolulu Advertiser in 1960-61, and instrumental in the founding of the Contemporary Arts Center of Hawaii. He was also a consultant for the creation of the Queen Emma Gallery at Queen’s Medical Center in 1977.

Asherman is also well known for his collaboration with Hawaii muralist Juliette May Fraser. They travelled to Greece and devoted many months in 1962-1963 creating murals for a small chapel in the village of Vavyli on the island of Chios. Fraser designed the murals and he was her technical assistant. He also painted his own mural in Mt. Athos. This experience cemented their friendship and they worked together on several murals in Hawaii. He became Fraser’s devoted assistant and supporter, promoting her career, handling her business affairs, and enabling her to work well past her ninetieth birthday.

While working with Fraser, he created several murals of his own in Hawaii in the 1970s and assisted other muralists as well, including being part of a team that created ten murals for the Ala Moana Hotel. He died a few months after May Fraser. 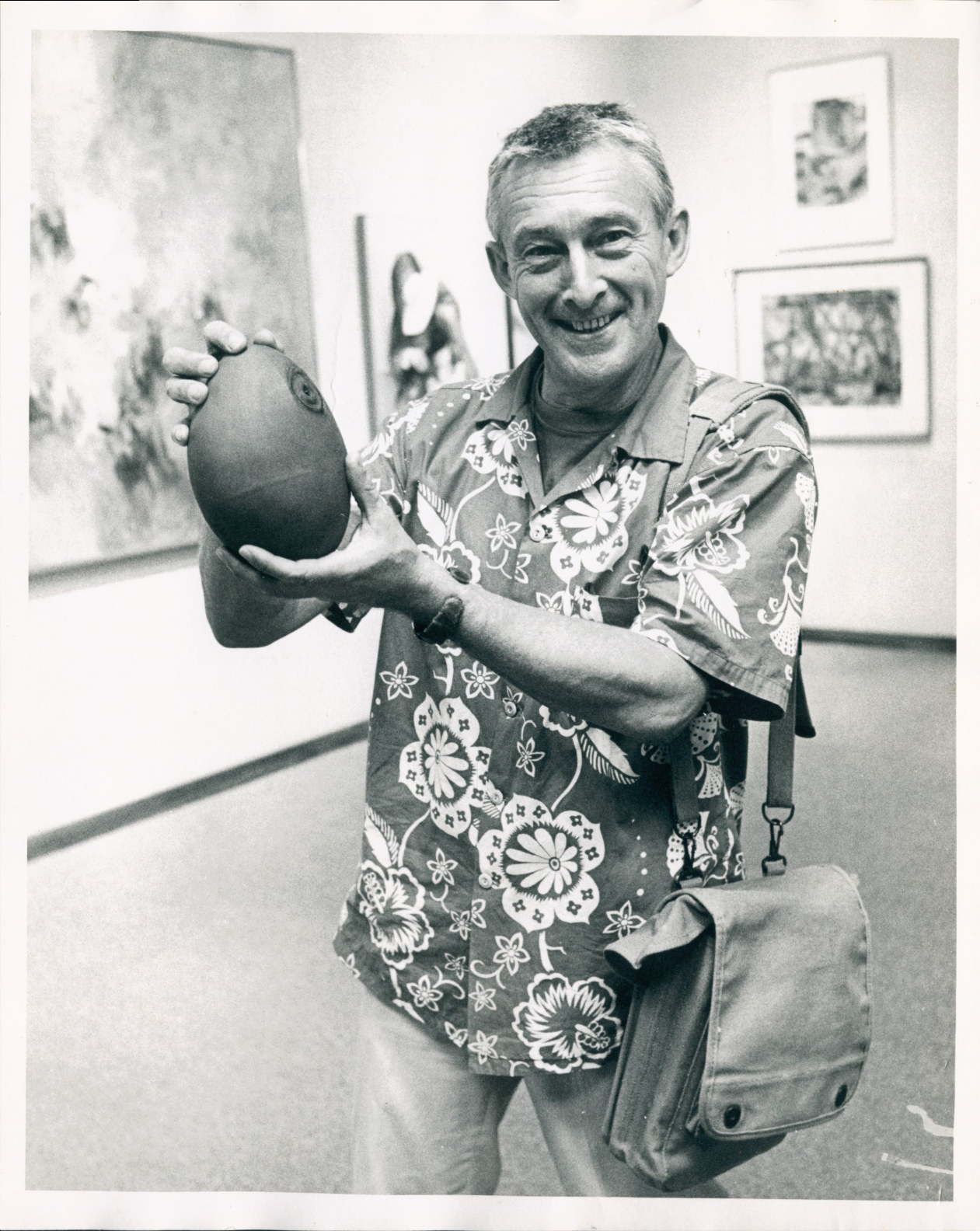 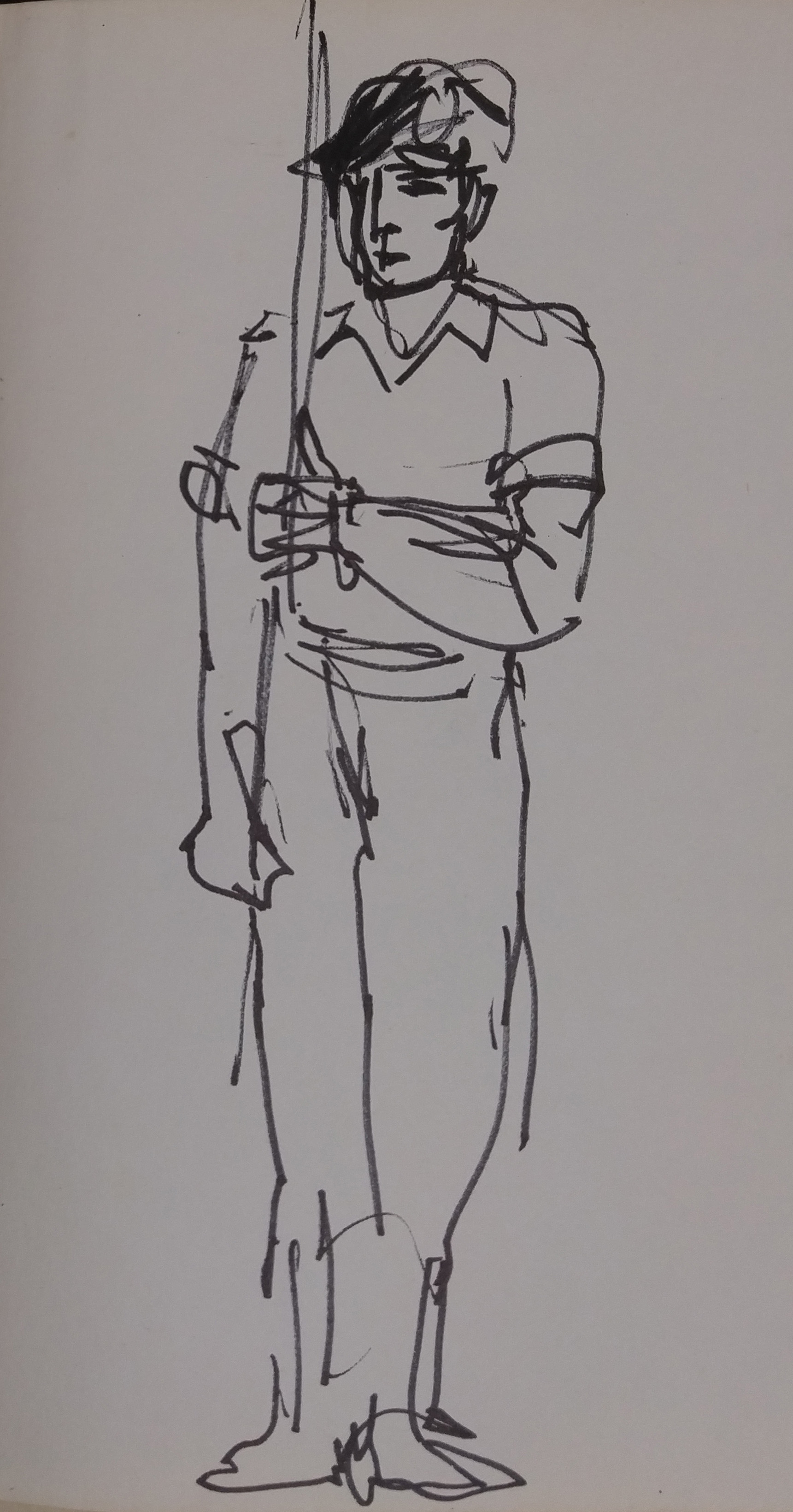 Sketch of a man in uniform with gun by David Asherman