Madge Tennent (1889-1972) was born Madeline Cook in Dulwich, England, and moved with her family to Cape Town, South Africa in 1894. She attended an English boarding school and a French convent in Paris, but returned to South Africa to attend the Cape Town School of Art at the age of twelve. Recognized as a child prodigy, she and her family relocated to Paris in 1902 so that she could receive advanced instruction at the Academie Julian (1902-1906). Tennent held her own with older students and devoted long hours to drawing and painting, pausing only to pay long visits to the Louvre.

In 1907, Tennent returned to South Africa where she taught art for a few years and exhibited her own work widely. She established her own art school by 1913. She met Hugh Cowper Tennent, an accountant from New Zealand, and they married in 2015. They moved to New Zealand where she taught at an art school. During World War I, she lived with her husband’s parents while he was posted in France. In 1917, he became treasurer of the government of British Samoa where the Tennents lived for six years. This is where she became fascinated with the native people and devoted much of her time to drawing charcoal portraits of Samoans.

She stopped in Honolulu en route to England to enroll her two sons in school, intending a brief visit. However, the local cultural elite persuaded her to stay. She became just as fascinated with native Hawaiians as she had been with Samoans. Her husband joined her in 1923 and began establishing his own accountancy firm. Tennent supported her family as a portrait artist and became very successful, although she chafed at portraying mostly Caucasians.

She soon embarked on a program of study and research to learn more about Polynesians and in her work she tried to convey her reverent vision of native Hawaiians. By the mid-1930s, Tennent’s images reflected tropical colors in large oil paintings of majestic Hawaiian women for which she is well known.

The Honolulu Academy of Arts (now Honolulu Museum of Art) opened in 1927 and Tennent’s work was included in its inaugural exhibition. In the same year, she made several presentations there on art, drawing and the use of color.

In 1929, Tennent and six other Hawaii artists founded The Seven, one of the first groups of women artists in the United States. They were determined to exhibit their work in an art society that usually exhibited only men. The group was an inspiration to several generations of female artists who continue to claim their place in the art world.

She believed that an artist’s work must evolve or become stale and in the 1940s her use of color became more subdued and was primarily in blues and earth tones. She continued to produce art in a variety of mediums and styles, but always portrayed Hawaiian subjects. Her work was exhibited in the 1934 New York World’s Fair, and in numerous other venues in New York City, Chicago, Honolulu and overseas.

Among the collections that hold her work are the Honolulu Museum of Art, the Hawaii State Art Museum, the de Young Museum and the Victoria and Albert Museum in London. In 1941, Tennent was honored by the Honolulu Printmakers as their member gift print artist for the annual exhibition.

The largest collection aside from the Tennant Foundation’s was accumulated by Donald Angus (1908 – 2001). As a teenager, he lived next door to Tennent and they became lifelong friends. He was an art dealer who constantly supported and championed the artist and her work. His collection has been exhibited several times.

Tennent commissioned renowned local architect Vladimir Ossipoff to build her house in 1953 in the Punchbowl district of Honolulu and lived there until she died. In 1954 she founded the Madge Tennent Foundation to care for her work. Her son Arthur established the Tennent Art Foundation Gallery in the house to exhibit her art – the world’s largest collection. In 2005, the trustees of the Foundation designated The Hawaii Preparatory Academy on Hawaii Island to be the caretaker of the collection. The Academy’s Isaac’s Art Center regularly exhibits her work. 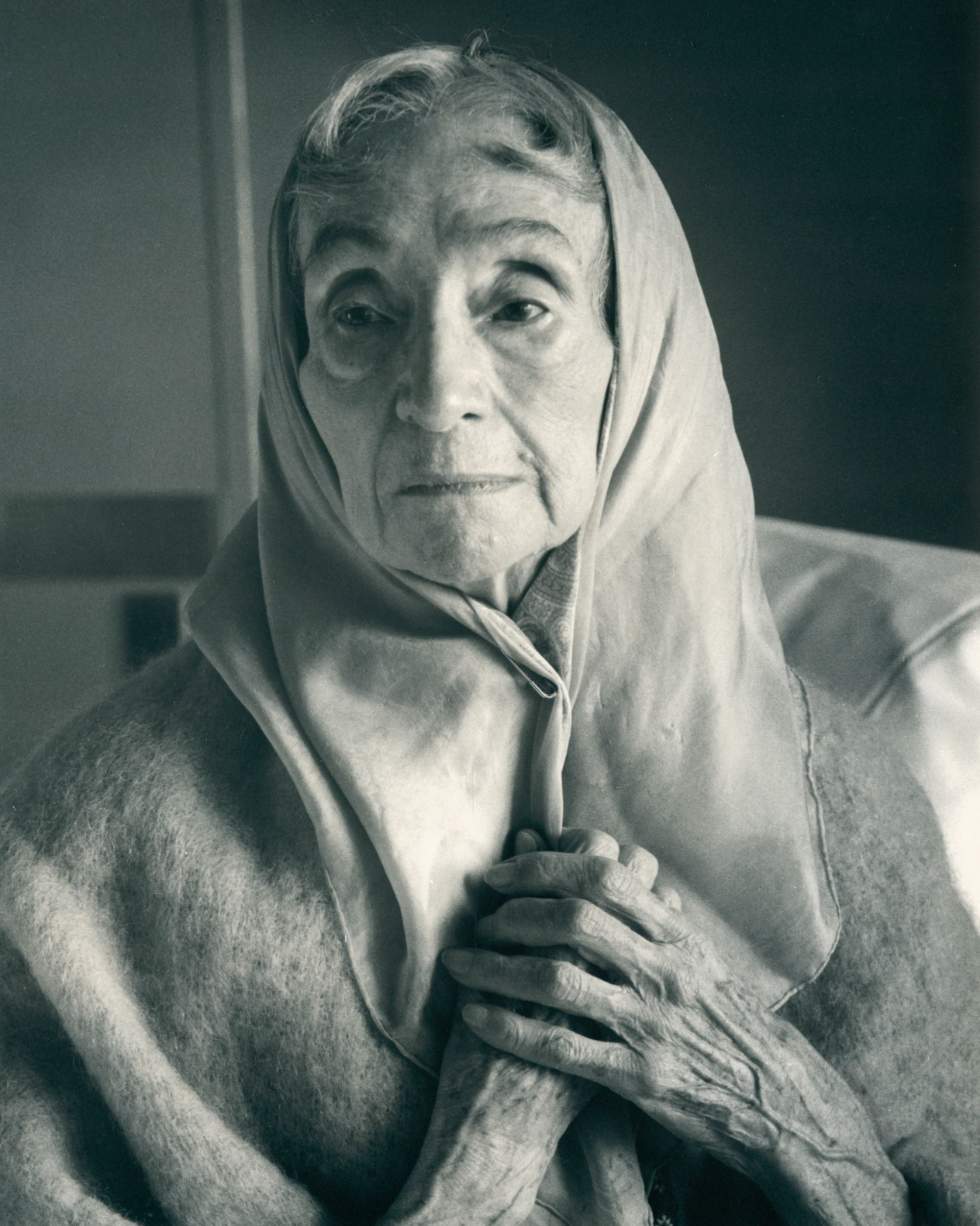 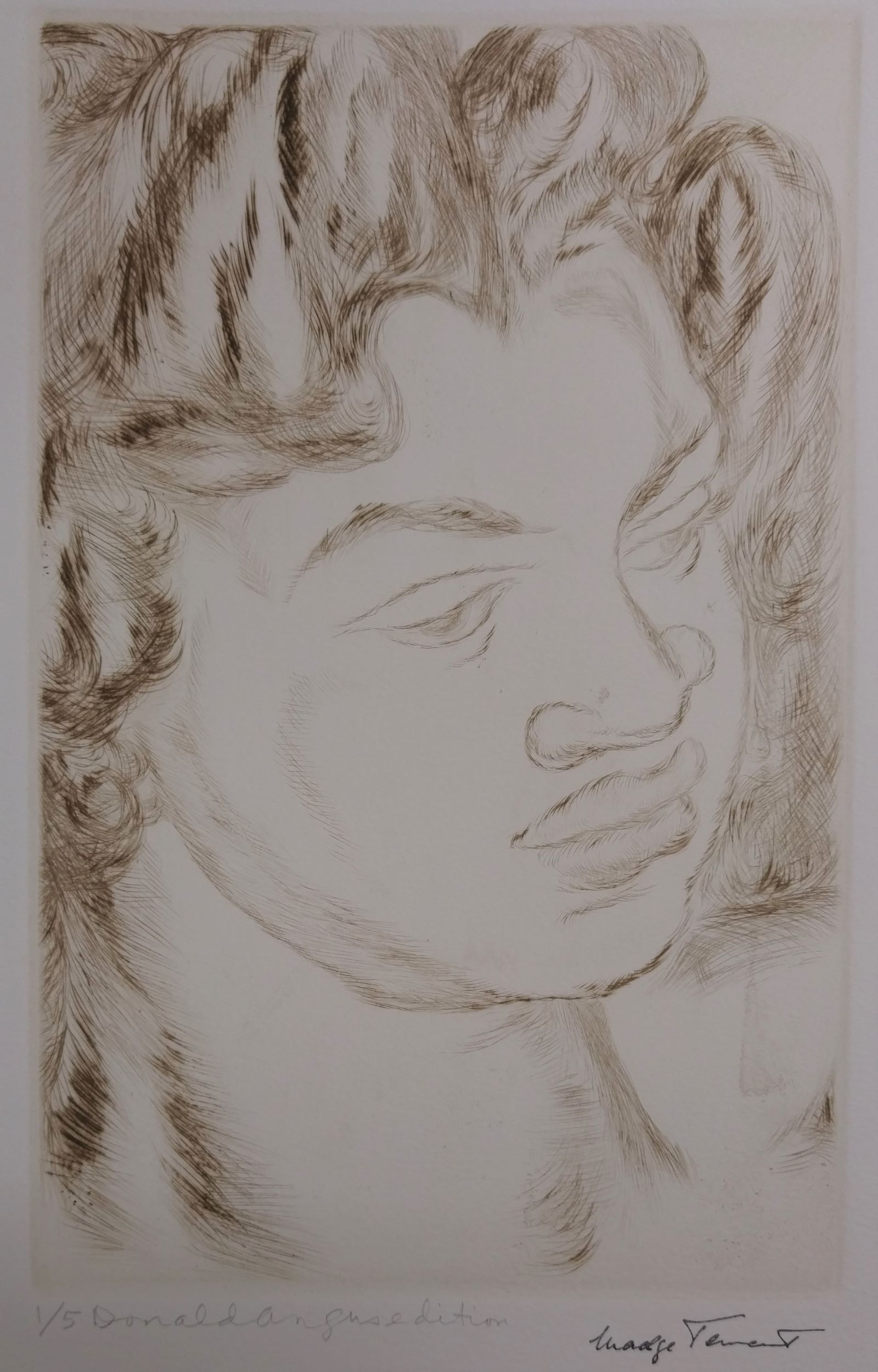 Tennent, Madge, and Donald Angus. 53 Drawings by Madge Tennent : Given by Her to Donald Angus. Place of publication not identified: Publisher not identified. Print.
https://uhawaii-manoa.primo.exlibrisgroup.com/permalink/01UHAWAII_MANOA/11uc19p/alma9933995234605682